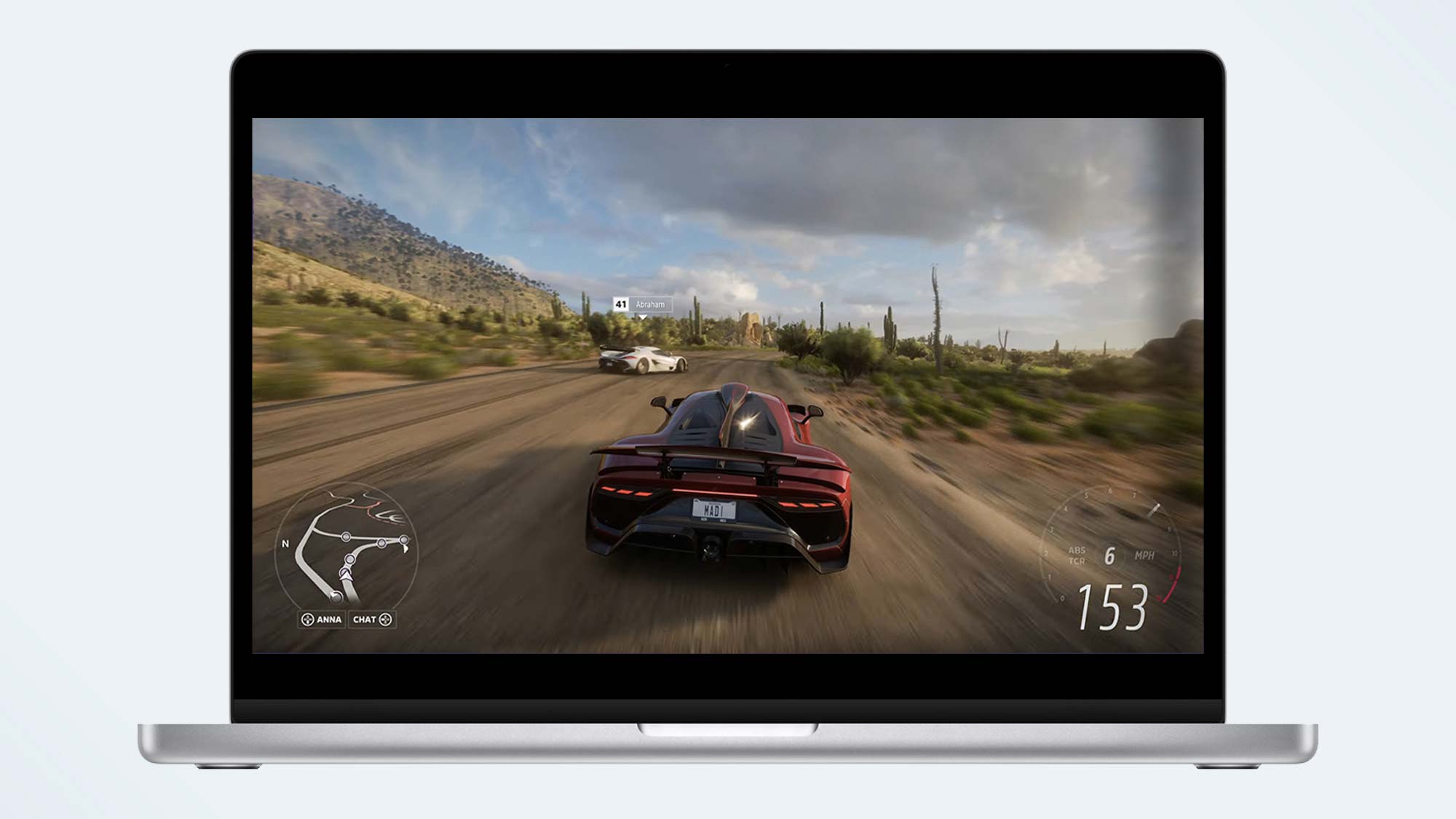 Sure, Steam is available on Mac and there are some AAA titles up for grabs from the App Store, but let’s be honest, Apple’s gaming pedigree practically disappeared when Halo vanished after its Macworld debut in 1999. Master Chief’s move to the Xbox felt like a death knell for it all. Since then, every Mac review has always come with one caveat: don’t buy one if you want to game.

That’s a shame because Apple Arcade is one of the best value gaming subscription services, and the most underrated, too. The range of titles Apple chose shows the team has the intuition needed for curating a good catalogue.

And now, to paraphrase Nintendo’s classic marketing catchphrase: the company is really playing with power thanks to the M1 Pro and M1 Max. These chips pack up to 32 GPU cores, which practically match laptops with top-of-the-range dedicated graphics cards. You can see just how great they are by reading our 14-inch MacBook Pro review.

But these numbers were purely for prosumer productivity, such as Final Cut exports. Since their launch, one question has been answered by a lot of YouTubers: how do they perform for games?

And the answer is a solid “OK.” The library of games that run natively on Apple silicon is extremely limited, with the only example being World of Warcraft, which runs incredibly well. x86 games (games built for Intel Macs) that run through Rosetta 2’s emulation layer are playable, but are nowhere near as graphically rich and smooth as what you could get from an RTX 3080 laptop.

Let’s take ZONEofTECH’s gaming test video as an example. Starcraft 2 on ultra settings runs at just 20 frames per second, which is abysmal compared to equivalent Windows laptops. And while devs share a small part of the blame (these games have not been updated to run natively on the M1), Apple hasn’t made the Mac an enticing place for people to game.

However, that’s what creative pros desire. We want an all-in-one system that crushes creative work but is able to play games: your classic “work by day, play by night” scenario. While the new MacBook Pros nail that first bit, they don’t come close to achieving that second part, and Apple should really fix that.

What do I want?

I’ve read a million other “hot take” pieces like these and have always been left disappointed by the lack of recommended actions Apple could take. If I’m complaining about something, I want to be constructive and provide a solution.

And the three-step solution here is ambitious, but simple on paper:


Amazon Ad: This site contains affiliate links to products. We may receive a commission for purchases made through these links.
previousReleasing Windows 11 Build 22000.346 to Beta and Release Preview Channels
nextBest laptop coolers 2021 | Laptop Mag

We use cookies on our website to give you the most relevant experience by remembering your preferences and repeat visits. By clicking “Accept”, you consent to the use of ALL the cookies.
Cookie settingsACCEPT
Manage consent

This website uses cookies to improve your experience while you navigate through the website. Out of these, the cookies that are categorized as necessary are stored on your browser as they are essential for the working of basic functionalities of the website. We also use third-party cookies that help us analyze and understand how you use this website. These cookies will be stored in your browser only with your consent. You also have the option to opt-out of these cookies. But opting out of some of these cookies may affect your browsing experience.
Necessary Always Enabled
Necessary cookies are absolutely essential for the website to function properly. These cookies ensure basic functionalities and security features of the website, anonymously.
Functional
Functional cookies help to perform certain functionalities like sharing the content of the website on social media platforms, collect feedbacks, and other third-party features.
Performance
Performance cookies are used to understand and analyze the key performance indexes of the website which helps in delivering a better user experience for the visitors.
Analytics
Analytical cookies are used to understand how visitors interact with the website. These cookies help provide information on metrics the number of visitors, bounce rate, traffic source, etc.
Advertisement
Advertisement cookies are used to provide visitors with relevant ads and marketing campaigns. These cookies track visitors across websites and collect information to provide customized ads.
Others
Other uncategorized cookies are those that are being analyzed and have not been classified into a category as yet.
SAVE & ACCEPT